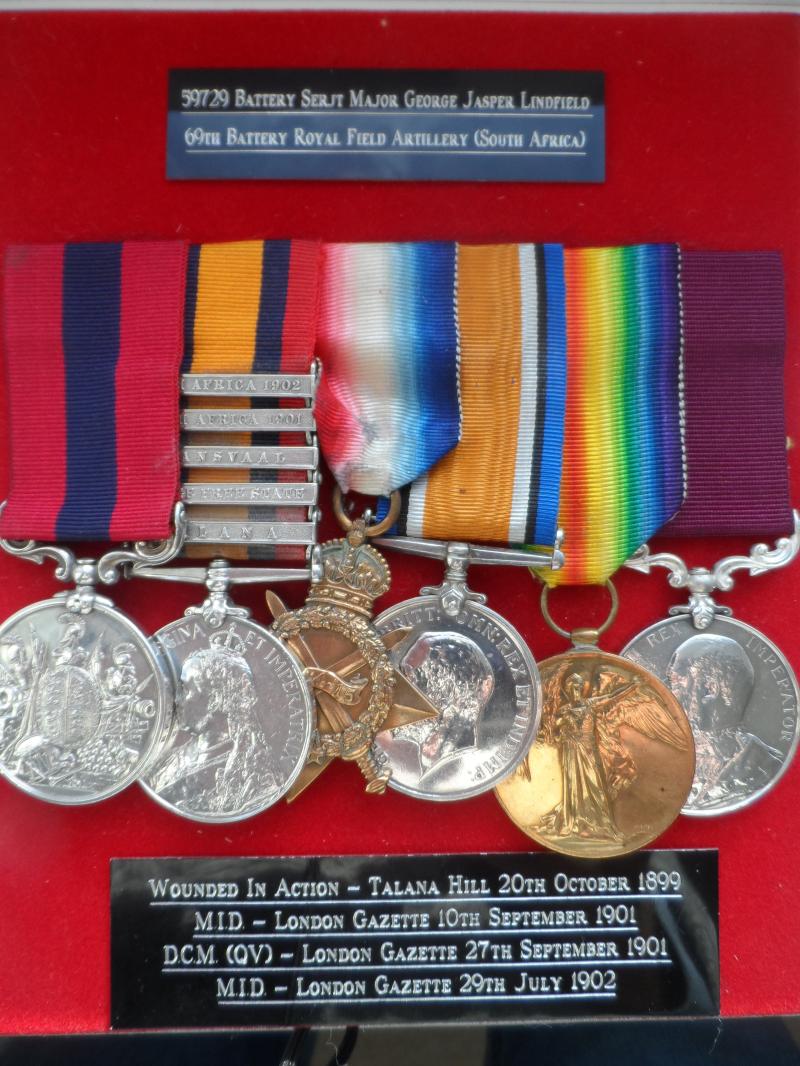 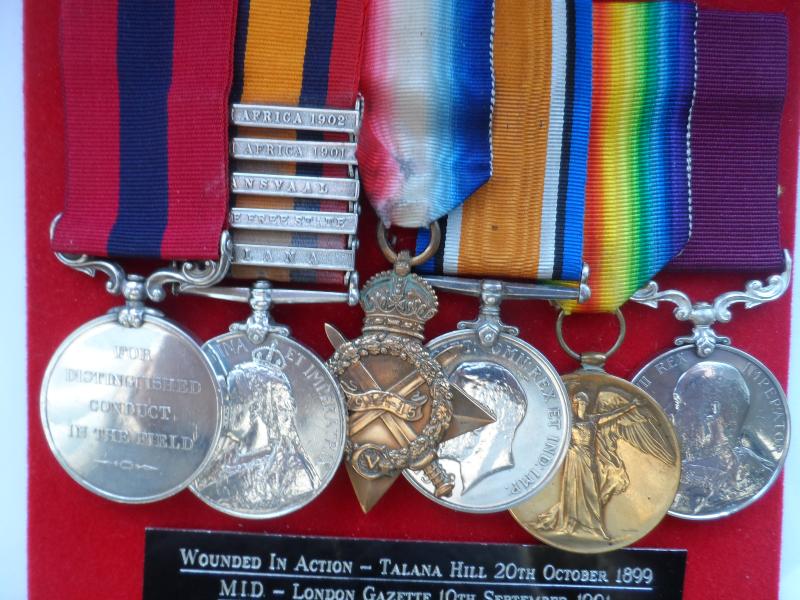 BOER WAR D.C.M. GROUP OF 6-TO LINDFIELD-WOUNDED AT TALANA HILL AND TWICE MENTIONED IN DESPATCHES

Distinguished Conduct Medal (Victoria) (59729 B.QR:-MR:-SERJT: G.J.LINFIELD.R.F.A.) Queens South Africa Medal, (3rd type reverse), clasps:
TALANA/ORANGE FREE STATE/TRANSVAAL/SOUTH AFRICA 1901/SOUTH AFRICA 1902 15927 (B: Q: MR: SJT: G.J.LINDFIELD 69TH BTY.R.F.A.)1914/15 Star (59727 B.S.MJR.G.LINDFIELD R.F.A.)British War and Victory Medals,(59727 W.O.CL.2.G.LINDFIELD.R.A.)
Army Long Service and Good Conduct Medal (Edward VII) (59727
C.S.MAJ.G.J.LINDFIELD.R.G.A.)
Medals about good very fine, and mounted on felt board for display.
Born in Chelsea, London, and was aged 14 years and 9 months when he attested for service with the British Army at Devonport on 8th January 1887, joining as a Boy (No.59727) the Depot of the Western Division of the Royal Artillery. Having then attained adult age and remustered as a Driver on 13th June 1890, on that date he transferred to the Field Artillery for service with the 52nd Field Battery. Appointed Acting Bombardier on 8th June 1891, he then had the misfortune to be run over by a waggon and injured his right knee whilst on duty on 8th August 1891. Lindfield was promoted to Bombardier on 20th April 1892, and then promoted to Corporal on 13th May 1894 followed by Sergeant on 24th August 1896, he was then posted to the 69th Field Battery on 30th April 1897 and posted with this battery to South Africa on 13th May 1897. Having re-engaged to complete 21 years service on 31st January 1899, Linfield was out in South Africa on the outbreak of the Boer War. Linfield was present as a Sergeant with the 69th Field Battery at the Battle of Talana on 20th October 1899, when his battery was one of three present. Linfield is confirmed as having been wounded in action, having been hit in the right arm and breast on 20th October 1899, evidence of the exposed position to which his battery came under, and it is most probable that he was hit by shrapnel from the Boer artillery. The 69th Battery had three casualties at Talana, shown as Dundee on the casualty roll, the other two were fatalities. Linfield who due to his wounds, may not have taken part in his battery’s engagement at Lombard’s Kop on 30th October 1899, when, along with the 21st Battery, they were sent to support General French and gave most valuable service. It would appear that despite not being sent home, he was still not present with his battery when it fought at Laing’s Nek on 2nd to 9th June 1900, as he is noted as having been ‘released’ on 6th June 1900 at Waterval, and it must be assumed that he had been at some stage captured by the Boers. However Linfield was then present on operations in the Orange Free State and Transvaal, where the battery distinguished itself in Amersfoort, and was recognised for its efforts in Lord Robert’s Despatch of 10th October 1900. Meanwhile Linfield was promoted to Battery Quartermaster Sergeant on 9th November 1900. It is believed to be for the operations in the Transvaal from 9th November 1900 and March 1901, that Linfield was Mentioned in Despatches by Earl Roberts in his Despatch of 2nd April 1901, the continuance part of the Despatch dated 4th September 1901, as published in the London Gazette for 10th September 1901, and his award of the Distinguished Conduct Medal was published in the London Gazette for 27th September 1901, both awards being for his services with the 69th Field Battery. Linfield was one of three men of the 69th Battery to be awarded the Distinguished Conduct Medal in the London Gazette for 10th September 1901. In all seven Distinguished Conduct Medal’s were gained by men of the 69th Field Battery during the Boer War. Linfield had been appointed a Battery Quartermaster Sergeant with the 67th Field Battery on 29th June 1901, and he had officially transferred to the 67th Battery on 13th July 1901. Linfield had previously fought alongside the 67th Field Battery at Talana. Linfield then remained on service out in South Africa on operations in the Transvaal through to 1st November 1901 when he was posted to India. It was for his services during the latter stages of the Boer War, when serving as a Battery Quartermaster Sergeant with the 67th Field Battery, that Linfield was then Mentioned in Despatches for a second time during the war, this time by Lord Kitchener in his final Despatch of 23rd June 1902, as published in the London Gazette on 29th July 1902. Linfield was one of three men of his battery to be Mention in Despatches in this gazette, a period when the 67th Battery was chiefly employed on the Zululand border, and all three men showed good work in that final quarter of 1901. As mentioned, Linfield had sailed with the 67th Field Battery out to India on 1st November 1901, and having been on home leave in 1903, had married Emma Sutton at Folkestone, Kent on 13th January 1903. Linfield was eventually posted home on 29th January 1905, having been attached to the 9th Lancashire Royal Garrison Artillery Volunteers since 7th September 1904. Awarded the Army Long Service and Good Conduct Medal in Army Orders No.189 of 1905 on 1st October 1905. Linfield was then appointed Acting Sergeant Major on 1st June 1906 whilst with the 9th Lancashire Royal Garrison Artillery Volunteers, and extended his service beyond 21 years on 7th February 1908, being then transferred to the 3rd East Lancashire Royal Field Artillery Brigade on 1st April 1908 as an Acting Sergeant Major. Linfield was still in this position on the outbreak of the Great War, and having embarked from the United Kingdom on 9th September 1914, then saw service out in Egypt from 5th November 1914 with the 1st/3rd East Lancashire Royal Field Artillery Brigade, where he was promoted to Warrant Officer 2nd Class on 29th January 1915. Posted home to the Depot on 21st November 1916, Linfield was discharged on 1st December 1916, having seen a remarkable 29 years and 297 days service. Linfield latterly lived in Bolton, Lancashire, where he died on 16th August 1932. Biographical details courtesy of Find My Past.
Sold with London Gazettes, Medal rolls, etc. etc. mostly laminated